Remember this dialog from when you installed your distro? 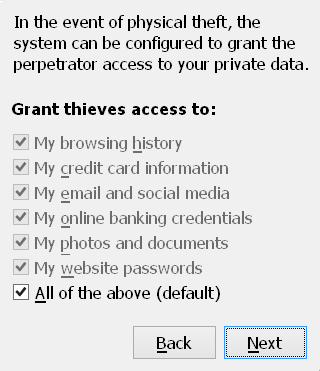 Most distros have a step like this. If you don’t immediately recognize it, you might have used a different installer with different wording. For example, the graphical Ubuntu installer calls it “Encrypt the new Ubuntu installation for security”, while the text installer even more opaquely calls it “Use entire disk and set up encrypted LVM”.

Somehow, some people have gotten it into their heads that not granting the new owner access to all your data after they steal your computer is a sign of paranoia. It’s 2015, and there actually exists people who have information based jobs and spend half their lives online, who not only think disk encryption is unnecessary but that it’s a sign you’re doing something illegal.

I have no idea what kind of poorly written crime dramas or irrational prime ministers they get this ridiculous notion from.

Here’s a photo from 2012, when my company laptop was taken from a locked office with an alarm system.

Was this the inevitable FBI raid I was expecting and encrypted my drive to thwart?

Or was it a junkie stealing an office computer from a company and user who, thanks to encryption, didn’t have to worry about online accounts, design documents, or the source code for their unreleased product?

Hundreds of thousands of computers are lost or stolen every year. I’m not paranoid for using disk encryption, you’re just foolish if you don’t.